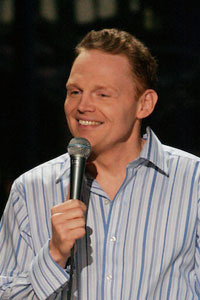 Why would you listen to another human being tell you where you’re going to go when you die? “Dude, have you ever been dead?” “No.” “So, wouldn’t it be safe to assume that you wouldn’t have the slightest fucking idea what you’re talking about.”

I'll tell you why -- because, in the unlikely event that we're both on the Titanic and it starts to sink, for some reason, you get to leave with the kids and I have to stay -- that's why I get the dollar more an hour.

This beautiful woman has something written on the side of her body, it says, "whatever is not the stars to hold our destinies, but in ourselves"... I just don’t under - why? why? why do people do that? Is that for when she’s hookin’ up with some guy, right? And he’s bangin’ her doggy style and he kinda leans over, and he looks and then he reads that, and like what’s he supposed to think then? Like, "Da... this bitch is deep!"

You wanna know how you know you’re informed as a protestor? They don’t show your interview on TV.

'Several NFL players said they would support a team mate that came out as gay...' Yeah, why wouldn't you?!