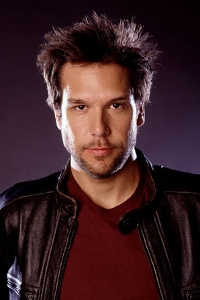 [talking about movie dates and how guys can never find their seats] So it's dark and the movie already started. And that first part of the movie is always some fucking cave scene and you're just like, "Can they just flashback to a beach scene for like ten god damn seconds?"

Best of the worst car accidents. They showed this one clip. Two cars go around the corner and they catch each other and start to roll and the tyre flies into the stands and hit's a woman in the face. And where you first saw it you where like OHHHHHH! That tyre just hit that woman in the FACE!... Oh good they're showing it again look look look... Look at this right here, yeah that's when it hit's that woman in the face! And the funny thing is every body around the lady like dove off. Everyone got out of there but she just like sit's there and at the last minute as the tyre is rocketing at her face. This is her defence she goes Ooooohhhhhhh like she's just gonna get into a slap fight with a Goodyear! What a horrible way to go! "What happened to Mary?" "A tyre hit her in the face!" How do you say that without laughing? "What was she doing putting her face near tyres?" No no no no, this type hunted Mary down!

I don't know if I could kill someone with a frozen turkey because that is a lot of evidence to eat. Unless I found a whole room of people who also wanted that person dead.

If you're 1 of the 3 girls in pics with a greaseball whose arms are around you at a club you lose at life. If you're the greaseball you win.

I am an observer, I like to watch people. I am into psychology and people - how they act and such.