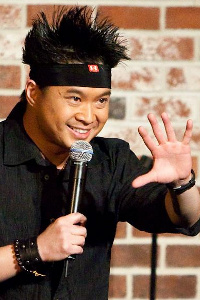 I love doing comedy, you guys. I knew comedy was for me when I was the only Asian in high school that failed math. But you know, when I failed, eight other students around me failed, too.

We want to be seen as more than just martial artists, or bad stereotype token roles in American TV and movies.

I was doing gigs to stay alive. I worked two or three jobs at a time, there were times when I stayed up for 36 hours straight. I slept in shopping mall parking lots. A stand-up gig paid $35; then I could eat for another few days until the next gig. Literally, I was performing to live.

I knew comedy was the thing for me when I was the only Asian kid in high school... who failed math.

When you grow up poor, you have to either work really hard to try and get where you want to be, or you'll just stay put.