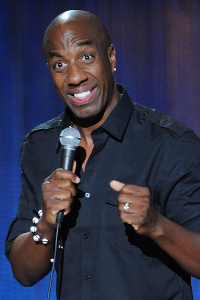 I wish black people had a flag they could put into the ground, like when the troops stormed Iwo Jima.

I have my website, The Ruckus, which is an Internet site, similar to the Funny or Die format, where people post funny videos. I get a chance to rate their videos; they get a chance to blog and kick it with me.

I just always found it easier to be the same guy onstage as you are offstage.

Being a parent is about your survival. Surviving the terrible two's is the most important thing.