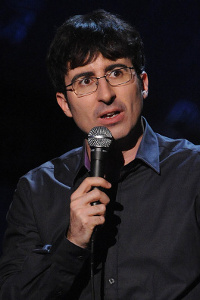 I think the best analogy for where we are right now is that America is Elvis Presley -- the most beautiful, talented, rebellious nation in the history of Earth. And now, you're in your Vegas years. You've squeezed yourself into a white jumpsuit, you're wheezing your way through 'Love Me Tender' and you might be about to pass away bloated on the toilet. But you're still the King.

I'm like oysters; a few people claim they're a delicacy, but most people find the idea of putting one in their mouth disgusting.

Let me make one thing perfectly clear to you: this is not writing. I have absolutely no idea how this sentence I’m currently saying is going to finish. When and if it does, I can only hope it makes some kind of coherent ceramic pineapple.

Six months ago, in Saudi Arabia, a suicide bomber managed to get close to a Saudi prince. And he did this by hiding a bomb inside him; he managed to get explosives and a detonator inside his anus. And he detonated that bomb, killing nobody -- apart from himself -- a lot. When I first heard that story, my instinctive reaction was, that is definitely the world's greatest missed opportunity for a pull my finger joke.