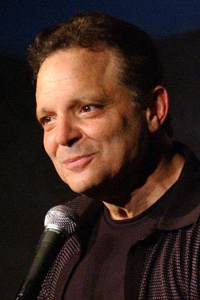 Going to war over religion is basically killing each other to see who’s got the better imaginary friend.

We can all help other people more than we do…. You’re sitting home. You’re on the couch. It’s one in the morning. And you hear, “For $9 a week you can help this starving child.” Everybody got the nine bucks. How do you not give it to them? You got to rationalize it somehow. You gotta go, “Yeaaah, that kid doesn’t look too hungry to me. Shit, he’s got a bigger belly than I do.”

Know why it takes so many sperm to fetrtilize one egg - cause none of those fuckers will ask for directions.

A bunch of money-grubbin', greenhouse-gasing, seal-clubbing, oil-drilling, Bible-thumping, missile-firing, right-to-life-ing, lethal-injecting hypocrites. People whose idea of a good time is strapping a dead panda to a Lincoln Navigator and running over everybody in the gay parade.

In any relationship there are certain doors that should never be opened. The bathroom door, for example.