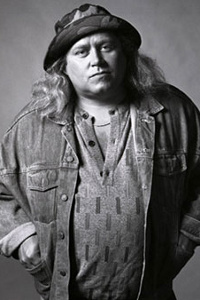 The Police report said they stabbed this guy 51 times, bludgeoned him in the head with a heavy object 13 times and they shot him twice, so I figure this guy's by the door on the way out going, “YOU DON'T HAVE TO LEAVE YET, DO YOU?! YOU HAVEN'T SHOVED A CHAINSAW UP MY ASS YET! MY HEAD'S STILL ON MY TORSO!! I'M GLAD YOU FUCKERS CAN HANDLE YOUR HIGH!!”

I like Jesus, I just felt sorry for his Disciples. Those guys had the roughest job in the world cause they could never call in sick. They could never go "Shhh shhh, yeah I know, I'll talk to him, it'll be alright..." [ring, ring... Jesus picks up] "[coughing...] Yeah listen Jesus. Yeah listen four or five of us went fishing last night and we forgot our sweaters. Yeah we're coming down with a cold or something. Yeah we're not going to be able to walk to Jerusalem with you today... What? What we're healed? But you're not here, ohh you don't have to be here you can say the word and we're healed? I didn't know that. Yeah every body is up. Yeah be good OK. We'll see you in about ten minutes alright. OK thank you, alright so long. Come on guy let go... we're healed."

Jim Bakker. He's lost everything, he's ruined. And the worst thing of all he still has to wake up to her!

If I get married again, I want a guy there with a drum to do rimshots during the vows.