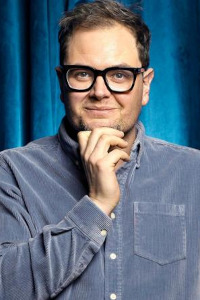 Dad instantly set out his stall:he wanted a big dog, a 'man dog',a dog that if it was human would enjoy a pint and stare at the barmaid's arse

On house-hunting: They said it was split-level and open-plan, but then again so is an NCP car park.

I got spotted in Greggs the bakers. The girl went: ‘We never get anyone off the telly in here.’ Which was a lie. Half of fucking Fat Club were by the pasties.

When I was a kid I used to hate getting picked for team sports. It would be the fit and sporty guys over there. And me and the fat kids over here. Those kids were fat! One girl had to be cut out a hula hoop.