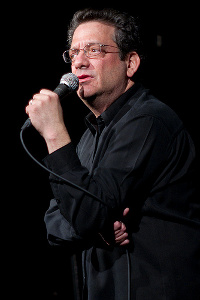 Over in Amsterdam, they spoke pot. They mix it with hash and tobacco and they roll it together. And the reason why they do that: they have so many vices, they have to combine them. “Oh, I’ll smoke pot but I don’t want to have that cut into my cigarette smoking time. I’m doin’ a hooker in 10 minutes.”

Here's a guy who's never faced combat or anything in his life - or really had a tough day - and he's like, 'Bring it on,' I love that. He's like, 'Ya got a problem? Bring it on. Over there. In Iraq. Where the troops are.'

I was recently voted best standup never to win a major.

I believe conspiracy theories are part of a larger conspiracy to distract us from the real conspiracy. String theory.