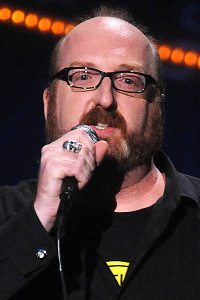 When I'm late it matters, but when everybody else is late it doesn't matter... If that's the rule then just write it down and then I know, you know... I'll read it and I'll write it down on my balls. Right here. Right here on the back of my balls is where I'll write it. On the very back. I'll just lift them and write it nicely.

Guys don't do that when they go out. Guys don't wear outfits that feature the dong.

Grew up in a small town where there was only one crazy guy. He didn't even go insane doing anything good, like going to 'Nam or having an extended acid trip. Turns out - legend has it - he just had some bad cheese.

I also smoke a lot of pot, occasionally, every day.

People Sinatra should have sung with? Slayer.