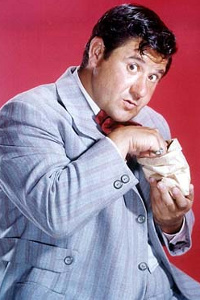 A guy goes into a pet shop and tells the owner that he needs a pet for his mother. The guy says that Mom lives alone and could really use some company. Pet shop guy says, "I have just what she needs. A parrot that can speak in 5 languages. She'll have a lot of fun with that bird." The guy says he'll take the parrot and makes arrangement to have the bird delivered to his Mom. A few days pass and the man calls his mother. "Well Mom, how did you like that bird I sent?" She says, "Oh son, he was delicious!" Aghast, the guys says, "Mom, you ate that bird? Why, he could speak 5 languages!" Mom says, "well, he shoulda said something."

The whole thing is if the dog’s in the room with you during sex and you don’t know he’s there. And you’re going pretty good and you hear an extra set of breathing. You’re scared to open your eyes. You think the kids are selling tickets or something.

It's only a joke and the duck didn't really die, and you conservationists are probably all pure vegetarians and don't eat meat or anything like that and you're worried...I hope a butterfly flies up your nose you choke to death!

I've had a good day when I don't fall out of the cart.