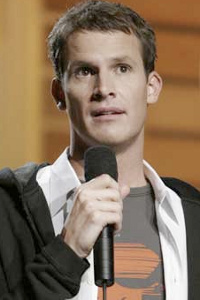 I'm all for women who get plastic surgery, because plastic surgery allows you to make your outer appearance resemble your inner appearance — fake...We have shows like Extreme Make-Over: "I don't want to develop a personality, just cut my face! Stretch it and staple it. Now I'm happy, or at least I look like it."

I’m not very good with people. Even when I was little, my imaginary friend would play with the kid across the street. And I’d be like, “I guess we’ll meet up later.” And he’d be like, “Whatever, queer.”

Girls in Los Angeles like to say, “I’m not relgious, but I’m spiritual.” I like to reply, “I’m not honest, but you’re interesting.”

"Money doesn't buy happiness." Uh, do you live in America? 'Cause it buys a WaveRunner. Have you ever seen a sad person on a WaveRunner? Have you? Seriously, have you? Try to frown on a WaveRunner. You can't! They're so awesome, it's just throttle. People smile as they hit the pier. Because you forget, you need gas to turn. It goes against your natural instincts. Some of you aren't laughing; we all miss your cousin, but not laughing's not gonna bring him back. He's dead for a reason. He was a show-off, and he tried to spray us. "I didn't wanna get wet!" I yelled at his mother at the funeral.

When a ladder was stolen from a store the manager said that further steps would be taken.