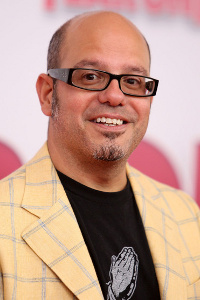 [With reference to a 'how to date' book] Because you've been on dates where y'know, you forget to open your eyes and wear pants and speak English.

So I was watching this one show where - there's a guy on stage and he pretends he has contact with the dead and spirits talk to him...[Some people in the audience give suggestions, one of which is Crossing Over.] Crossing–...no, no, no, no, no, it was, uh, church. It was church.

[On the Catholic Church's sex scandals] And y'know, they're God's representatives, so that means... God fucks little boys.

[After reading an article on Miles for Kids in an inflight journal] What [President of the Airline] is doing is, he's urging everyone to give up their frequent flyer miles for sick kids... But as I was reading this, there were two empty seats next to me. Why can't sick kids sit there? If they're so concerned with sick kids, shouldn't they have like a pen of sick kids next to the gate?

I do believe that on a whole, women are definitely smarter than men…I also believe that dogs are smarter than women. (woman in audience says “Not buying that”) No? That one, you don’t believe it? You believe that I didn’t do a series of tests? You are right to not believe it, because I’m going to go ahead and admit that I do not believe what I just said, it was what’s described as a 'joke.' Um, I’ll be telling a bunch of them here tonight.