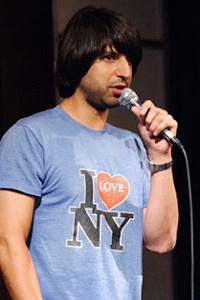 I like video games, but they're really violent. I'd like to play a video game where you help the people who were shot in all the other games. It'd be called 'Really Busy Hospital.'

I like "Rock, Paper, Scissors Two-Thirds." You know. "Rock breaks scissors." "These scissors are bent. They're destroyed. I can't cut stuff. So I lose." "Scissors cuts paper." "These are strips. This is not even paper. It's gonna take me forever to put this back together." "Paper covers rock." "Rock is fine. No structural damage to rock. Rock can break through paper at any point. Just say the word. Paper sucks." There should be "Rock, Dynamite with a Cutable Wick, Scissors."

I was seeing this girl and she wanted to get more serious. But I wasn't ready to, I had just gotten out of a difficult relationship before that. So I said to her, 'Listen, you have to understand something. Relationships are like eyebrows. It's better when there's a space between them.' And that's coming from a Greek guy.

A couple weeks ago I was on the street and I saw an ugly pregnant lady, and I just thought, 'Good for you.'