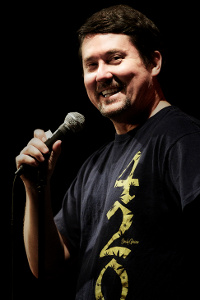 Like most comics, I just broke up with my girlfriend and the reason we broke up is I caught her lying… under another man.

I just broke up with my girl friend, i caught her lying....under another man.

Tom Cruise shouldn't try to win Oscars. He should just smile and kick people in the face and leave the acting to Hugh Jackman. Why Hugh Jackman? I dunno; come up with your own example, smart-ass.

I hate how all the hip hop bands of today will put crazy sound effects into their songs. You know what I mean, like a police or ambulance siren in a tune? Because I could own the CD, I could listen to it 50 gamillion times in my car - I still fall for it every time.

Einstein used science to get laid; that guy is a genius… I've been using money.