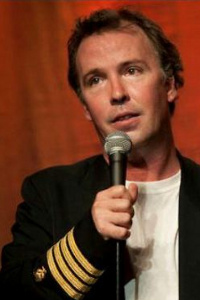 My act’s not for everyone. I get on stage, I feel like I’m leading you into battle. You’re not all going to be here at the end.

"A national day of prayer"? Does that scare the spine out of anyone? Especially when you consider that it's all those dog-shit religions that start these fucking wars to begin with. Ninety percent of every war that's ever been fought is because of some made-up, mind control, completely fictional religion. You never hear in the news, "200 killed today when Atheist rebels took heavy shelling from the Agnostic stronghold in the north". No, it's because you got a silly, placebo religion cuz you don't want to admit that you don't fucking know.

All illegal narcotics are medicinal. Boredom is a disease worse than cancer. Drugs cure it, with little or no side effects if used as directed. Life's temporary for a reason, it gets boring after awhile. You should be inventing new drugs is what you should be doing! Newer, crazier drugs... and more holes, that's what you ladies need!

If you get made fun of working at Pier One Imports, you can’t pelt them with poop.

The Internet has done nothing but good for comedy all around. Comedians no longer have to rely on TV execs and club owners deciding if they are funny or not.