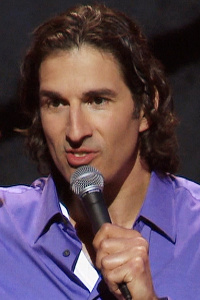 I always wanted to make strangers and friends and family laugh. I was over ten years younger than my brothers. It was hard to get attention without some kind of gimmick, like athletic stardom or being funny.

I really think I'm at the top of my game right now, and I have the tools that I've learned over the years, so I feel really good about what I'm doing onstage now.

I have 236 movies on my queue and I feel like I should always be watching movies. Like if I wake up in the middle of the night and don't fall directly back to sleep, I'm like, 'I've been up for an hour and a half I could have watched 'Toy Story 3' by now.' In this economy it is a sin not to be watching movies when you have Netflix.