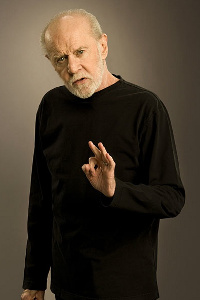 I was what they call a “fussy eater.” ‘He’s fussy! He’s a fussy eater!’ “Fussy eater” is a euphemism for “Big pain in the ass.”

...thanks to our fear of death in this country I won’t have to die. I’ll “pass away.” Or I’ll “expire” – like a magazine subscription. If it happens in the hospital they’ll call it a “terminal episode.” The insurance company will refer to it as “negative patient care outcome.” And if it’s the result of malpractice they’ll say it was a “therapeutic misadventure.” I’m telling ya, some of this language makes me want to vomit. Well, maybe not vomit. It makes we want to engage in an “involuntary personal protein spill.”

There are three kinds of people. Those who can count, and those who cannot.