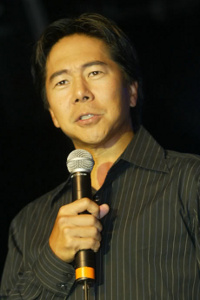 I'm going old school. Adult comedy but you can have your kids in the room. Kind of Andy Griffith meets Bill Cosby meets Bob Newhart. Also my character isn't an idiot as all the rest of the sitcoms recently have the dad character like Homer Simpson.

I think my one of my strengths in standup is my ability to adlib. I do all my best writing on stage. I can sit down and write jokes, but I'd rather go on stage with a premise or an idea and let the jokes come that way. My creative juices are never flowing any better than when I'm onstage.

My wife gets mad because we'll be in the middle of something and I'll stop and say, 'No, I've got to write this down!' She'll say, 'No! We're in a discussion!' I say, 'I know, but it's hilarious!'

My family is number one in my life. I'll blow off writing or just about anything to make sure I take my son to preschool or watch him at his swimming lesson.

My comedy is adult humor, but clean. It’s not campy. I’ve always worked in the mainstream and I’ve never billed myself as a “Christian comedian.” I’m just a comedian who’s a Christian.