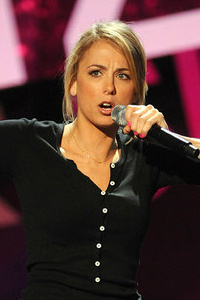 90% of the activities girls do is to get a guy’s attention and it’s just the way we’re built biologically. We love to get your attention. It’s part of the sport of it. You think I go to a sports bar because I like warm beer and sticky barstools? No! I go 'cause there’s guys there. You think I do a pub crawl every year because I like it when my liver hurts? No. I do it 'cause there’s guys there. We don’t wear heels for our circulation. We do it to prop up our butt so you’ll look at it and wanna mate with me. This isn’t a freaking game, alright? This isn't a push up bra - it's body armour. And this ain't make up, sweetheart - it's war paint! They say men are hunters and women are gatherers. Well, sort of. We gather information about you, and then we hunt you.

This isn’t a bra, it’s body armor. And this isn’t make up, it’s war paint.

It said, 'War Is Not the Answer.' I disagree. I think war absolutely is the answer. And if you don't agree with me, happy Fourth of July.

Never laugh at your significant other when they're having an orgasm. That is their time to shine.

I was in New York last Christmas - it's snowing; there's a guy in a t-shirt. I'm like, 'Dude, aren't you cold?' 'No, I'm from New York. I don't get cold.' Just 'cause you're from a cold place doesn't mean you're genetically predisposed to not feeling cold. You're not a penguin. I was like, 'In fact, sir, you're Puerto Rican, so if anything, you should be more cold.'