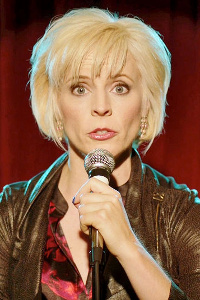 [impersonating her mother] Now, Maria, if a boy doesn't like you, I would just like you to know that he is intimidated by your beauty, because you are the most beautiful girl in the whole world and if you would stop doing impersonations of me I think other people would see that...

I think before giving me a credit card, they should have given me a math test. A series of story problems. “If Maria’s boyfriend is in a folk band but he only smokes pot every other day, what percentage of the rent will he be able to contribute?” Now I thought 50%. But the answer is zero.

I’ve been fired a lot. I prefer to call it just another stop on my Burning Bridges Tour.

My mom is very religious, and she said, ‘Whatever you think about all the time, that’s what you worship.’ If that’s the case, I’d like everyone to pop open their Diet Coke cans and turn to page 37 of their People magazines.