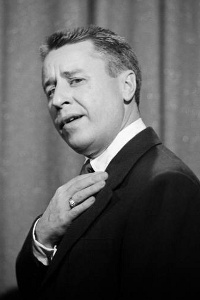 So that this thing that aired in 1963 would result a few years later in personal bankruptcy, would result in having people be on edge with me, wondering when I'm going to blow up.

Few, very few, will ever be able to craft a joke as beautifully as Pat. He was able to just make it all happen. I don't think he was great at telling them, but he was sure great at putting them down.

The most unusual salesman I ever met is a fellow who made a modest fortune purveying lightning rods. But he suddenly lost interest in his work. He got caught in a storm with a bunch of samples in his arms.

I will always love to perform standup comedy.

The most memorable performance was my appearance in concert in Carnegie Hall. The first standup to do so.